We recently shared a corpse flower (Amorphophallus titanum) bloom with our friends at Smithsonian Gardens, where it is was on display in the Enid A. Haupt Garden behind the Smithsonian Castle. It opened in peak bloom the evening of August 9, 2022, standing 102" tall and collapsed and was removed Aug. 15, 2022. Blooms typically stand 3-4 days.

About the 2022 Corpse Flower Plants

The first Amorphophallus titanum to bloom in 2022 was 9 years old, grown from seed. It was a sibling to a previous bloom that bloomed at 8 years old. The spadix was first seen on May 23, 2022. The plant was measured at 52" in height on that day. See daily height updates in the sidebar. The bloom opened on the evening of June 2, 2022, at a height of 97". Follow us on Facebook or Instagram for updates.

The Garden sent a second bloom to Philadelphia in June 2022 as part of a special display spotlighting our aroid collecting in the Philadelphia Flower Show. The plant was sent to Longwood Gardens after the Flower Show, where it bloomed on June 24, 2022, at a height of 76".

The fourth bloom in 2022 was on display in Smithsonian Gardens' Enid A. Haupt Garden August 9-15, 2022. It was the second bloom for this plant, which previuosly bloomed in 2020. The plant was 10 years old.

The corpse flower (Amorphophallus titanum) is listed as Endangered by the International Union for Conservation of Nature (IUCN), with an estimation of fewer than 1,000 individuals remaining in the wild. IUCN estimates the population has declined more than 50% over the past 150 years. The main reasons for the decline are logging and the conversion of the plant's native forest habitat to oil palm plantations.

The goal of the project is to identify and create a database of the genetic makeup of A. titanum plants currently in botanic garden collections. This information will be used to ensure a broadening of the gene pool by creating diversity amongst new offspring by cross-pollination of diverse parent plants. The USBG has gathered and submitted plant material from our A. titanum collection to be added into the database. We hope to be able to acquire pollen based on this project to create diverse offspring. The Garden also plans to collect pollen from this plant to store for future use by other botanic gardens in this project.

The allure of the corpse flower comes from its great size (it is the largest unbranched inflorescence in the plant kingdom), powerful stink, and fleeting presence. The plants frequently grow up to 8 feet tall in cultivation. Referred to as the corpse flower or stinky plant, its putrid smell is most potent during peak bloom at night into the early morning. The odor is often compared to the stench of rotting flesh. The inflorescence (a collection of flowers acting as one) also generates heat, which allows the stench to travel further. This combination of heat and smell efficiently lures corpse-attracted pollinators, such as carrion beetles and flies, from across long distances.

Watch a time lapse of a previous corpse flower bloom growing, opening, and collapsing here at the U.S. Botanic Garden. You can explore recordings of live Q&A programs, pollination, conservation, and more in this video archive playlist: viewing the full playlist on YouTube.

Join gardener Stephen to find out what clues he used to determine a previous bud (2020) was a bloom and not a leaf: 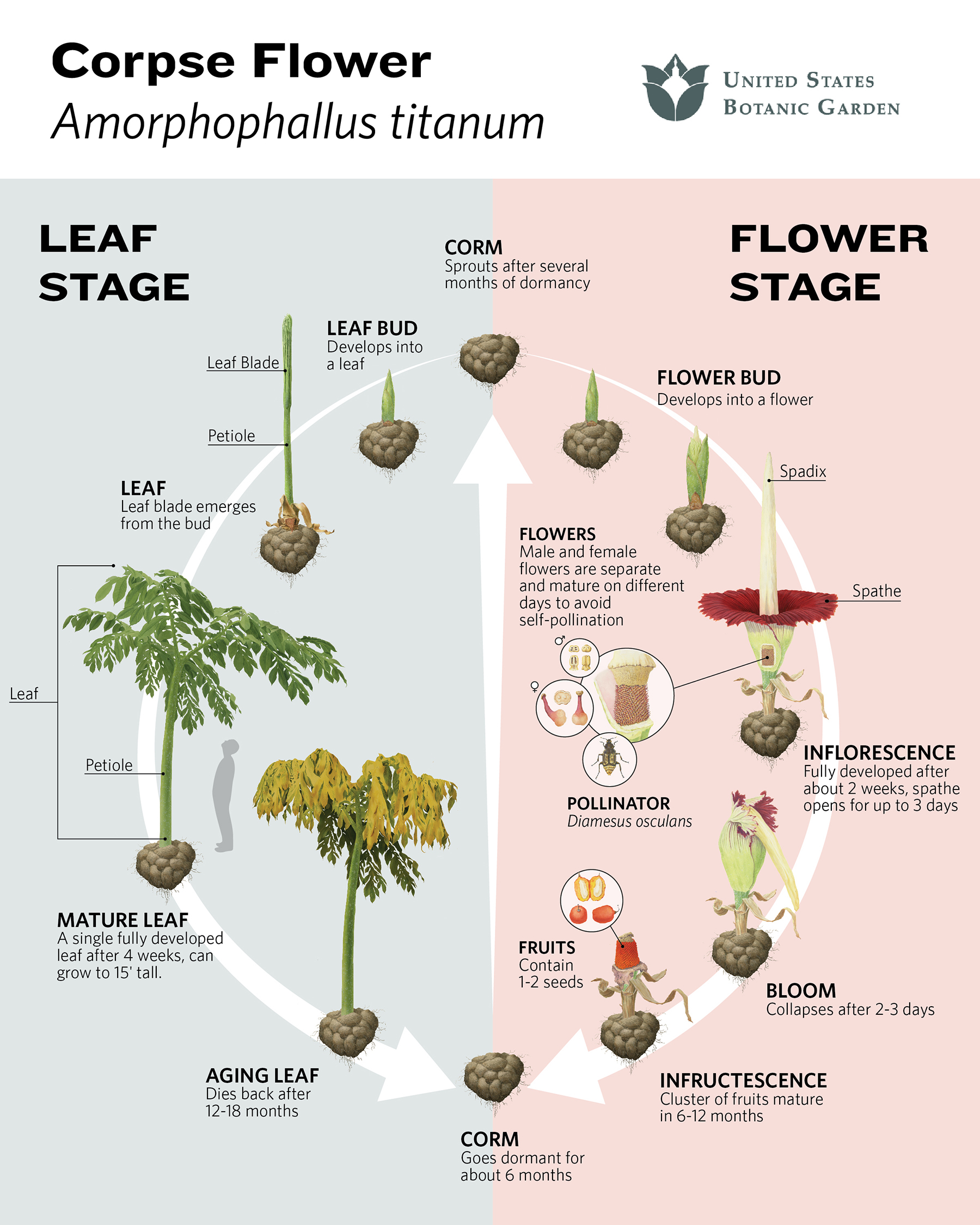 Check out this great video we helped create about the corpse flower's lifecycle, smell, and reproduction:

Compare this growth to our tallest corpse flower bloom in 2017: